On 14 December 2013, Police have arrested 47 people in its latest operation to clean up “African scams” in the country.

The operation saw around 242 police personnel and about 40 immigration officers hit the streets in search of members of the African scam syndicates. 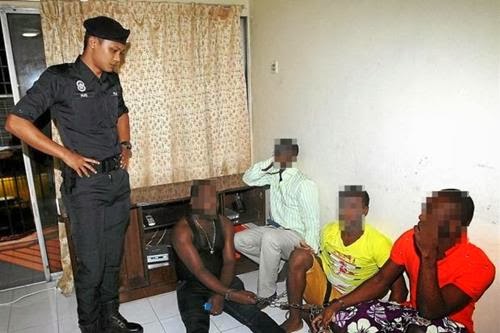 “Thirty-seven of those arrested were Nigerians while some were from Ghana and other parts of Africa. Three locals were also among those detained,” he said.

SAC Mohd Rodwan said 22 out of the 47 arrested were handed over to the Immigration Department as they lacked the proper travel documents.

“Most of these African syndicate members enter the country using student visas. These scams are various con jobs perpetrated by syndicates from Africa, including parcel and inheritance scams, black money and black magic.

“Scams involving Africans are getting serious in the country with more people falling prey to them,” he said.

He added that the number of arrests related to such scams had been on the rise this year with 476 arrests compared with 413 last year.