Two Dinar expert, Bradford Huebner, 66, of Ottawa Hills and Charles Emmenecker, 67, of Sylvania found guilty Thursday of swindling investors out of millions of dollars through the sale of Iraqi currency and two nonexistent hedge funds.


Both of them were convicted by a jury in U.S. District Court of conspiracy to commit wire fraud and wire fraud in connection with the $24 million scheme. 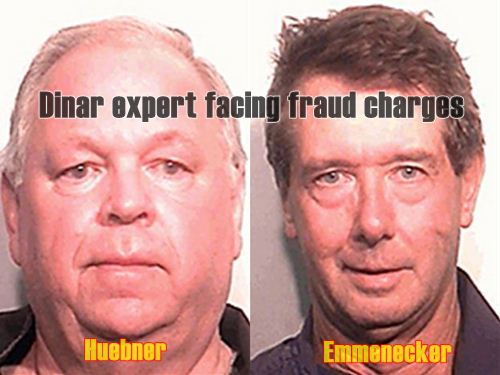 Their friend, Michael Teadt, 67, of Maumee was acquitted of those counts and of three counts of structuring transactions to evade reporting requirements and one count of making a false statement to an Internal Revenue Service agent. Teadt was found guilty of one count of mail fraud for a matter unrelated to the investment scheme.


Huebner, the founder of BH Group, which sold some $23.8 million of the currency known as dinar between 2010 and 2011, also was convicted of 30 counts of structuring, nine counts of money laundering, and one count of mail fraud.


Prosecutors alleged the group made false claims about the potential value of the dinar and portrayed a former member of the group, Rudolph Coenen, as a decorated Marine wounded in Iraq, among other falsehoods.


“The IRS put together a great case. They worked very hard on it,” Gene Crawford, an assistant U.S. attorney and lead prosecutor on the case, said after the verdicts were read. “We obviously thought we had a provable case, and we certainly won most of what we were looking for. We’re gratified with what the jury did, and we certainly respect their decision.”


He said the men could face a maximum of 20 years.

“We will certainly be asking for lengthy prison sentences,” Mr. Crawford said.


Also facing a lengthy prison sentence is Coenen, 47, of Jacksonville, who was not on trial but who pleaded guilty last year to conspiracy to commit wire fraud, wire fraud, and five counts of money laundering.


It was Coenen who was the bad guy in the case, defense attorney Rick Kerger told the jury at the opening of the trial. Mr. Kerger asserted his client, Huebner, was taken in by Coenen’s lies and misrepresentations and unknowingly repeated those to his customers.


After hearing two weeks of testimony in the case, the jury of six men and six women deliberated more than 17 hours over four days, deadlocking at one point on Wednesday before being sent back to the jury room to try to reach a unanimous decision.


“I’m obviously disappointed at the verdict, but certainly respect the effort the jurors put into reaching it,” Mr. Kerger said.


All three co-defendants took the witness stand during the trial. Huebner claimed he was only doing what he’d done all his life — running a legitimate business. Emmenecker and Teadt said they were not part of BH Group and never received compensation for anything they did to help Huebner, whom they considered a friend.


Coenen pleaded guilty in April, 2013, but has not been sentenced because as part of his plea agreement, he testified at his co-defendants’ trial.

Tweet
Posted by lunaticg
Labels: Court, Dinar
at 5:49 AM