Is it true that Kuwait Dinar revalue in 1991 when Iraq's invasion of Kuwait stops? Before you get the answer, I should explain to you what actually happened during that time. 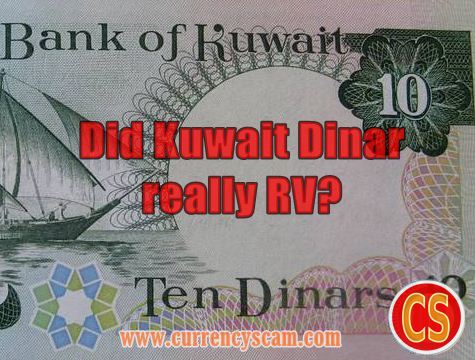 According to Business Times, 25 September 1990, Page 6, when Iraq invaded Kuwait in August 1990, they order a 12 days currency exchange for the holders of Kuwaiti dinars at one to one exchange with Iraqi dinar, each Kuwaiti dinar worth nearly US$3.5 before Iraq's invasion of Kuwait.


People who loss confidence on Kuwait change their Kuwait Dinar and the Kuwaiti currency soon withdrawn from circulation and has been replaced by Iraqi currency. During that time, Iraq don't just replacing the Kuwait currency, they also seized gold, foreign currency and goods worth between US$3 billion to US$4 billion from the Institute of the financial institutions and trading in Kuwait. The Kuwait Central Bank's vaults of gold and cash has been emptied by Iraqi troops.


On 11 August 1990, The Business Times reported that banks and money changers had suspended the Kuwaiti currency trading, with many of them even shying away from quoting other Middle-east currencies. Most expatriates living in the Middle east during that time exchange their middle east currency with US Dollar.


On 18 January 1991, Reuter reports that The Kuwaiti dinar has soared on Middle East black markets in the run up to a Gulf war in the expectation that a restored government would honour the currency at its former value.


After the invasion was over on February 1991, Kuwait issued new currency on 24 March 1991. On 21 March 1991, Kuwait Central Bank Governor Salem Abdul Aziz al-Sabah said 700 million newly-minted Kuwaiti dinars had already arrived in the vaults from Germany and London.


The New York Times, March 25, 1991 reported the Kuwait Central Bank is canceling the value of Kuwaiti dinars that were seized from the Central Bank and put into circulation by the Iraqis. The invalid serial numbers were posted in front of all banks in the city. All other old dinars can be exchanged for new ones on a one-to-one rate until May 7, when the old dinars become invalid. The new official exchange rate is 3.47 American dollars for one new Kuwaiti dinar.


In Kuwait Dinar case, the new official exchange rate (US$3.47) is almost the same as the value (US$3.5) before Iraq's invasion. Kuwait government don't borrow money from foreign institution for the Kuwait reconstruction. They have US$100 billion in overseas investments to help them for the Kuwait reconstruction. In the closing hours of the Gulf War in February 1991, the Iraqi occupation forces set ablaze or damaged 749 of Kuwait's oil wells. All of these fires were extinguished within a year. Production has been restored, andrefineries and facilities have been modernized. Oil exports surpassed their pre-invasion levels in 1993 with production levels only constrained by OPEC quotas. The gold looted from Kuwait had been return by Iraq on August 1991.


What is happening during Kuwait RV in 1991 and what happened with Iraq is totally a different situation.